Great strides are being made on the project, all of the 54” steel pipeline is in the ground and Hydro Resources from Fort Lupton have drilled the 12 wells.  The wells have stainless-steel casing and stainless-steel screens, an upgrade from the traditional carbon steel which adds much more life to the wells.  After the drilling process, the wells have been “swabbed”, a process of cleaning the well screens and preparing the well for the intended uses.  In addition to swabbing or developing the wells, Hydro’s contract included pump testing each of the wells on varying flow rates and time intervals.  Sustained pumping yields have varied from 2,400 gallons per minute (gpm) to 3,600 gpm.  I can see Robert Walker, or Bob as we all knew him, with a grin on his face as the meter dial reached 3,600 gpm from one of the 24” diameter wells.

Central’s decree for the project allows the District a right to pump 50 cubic feet per second (cfs) as a combined total from the project wells.  3,600 gpm is about 8 cfs.

The steel pipeline contractor (Concrete Express, Inc.) has pressure tested half of the 3.5 miles of pipeline and will conduct the pressure test on the remaining length very soon.  William “Billy” Mihelich, District Engineer, got the opportunity to walk inside the entire length of the pipeline to inspect the pipeline and ensure the interior welds at each 50’ joint, and the interior coatings were satisfactory.  Billy enjoyed the inspection, good thing he’s young and agile to get the job done!

In June, the Central Board awarded the manifold pipeline job to AB Underground, from La Salle, CO.  AB Underground will install about 1,800 feet of main manifold pipeline and arterial pipelines from the string of wells along the river which will eventually connect to the 54” steel pipeline.  The pipeline and fittings will be made of HDPE, or high-density polyethylene pipe.  This HDPE has a somewhat flexible nature to it which will be beneficial as the pipeline route meanders along the river bottom picking up water from the 12 wells.  Materials are being ordered, and the pipeline should be installed in the next few months.

The Walker Recharge Project is located in Weld and Morgan Counties between the towns of Orchard and Wiggins.  Water will be diverted from the South Platte River by four wellfields and three surface diversions located near the town of Orchard. Water will then be pumped south and east through a buried pipeline to various recharge facilities. 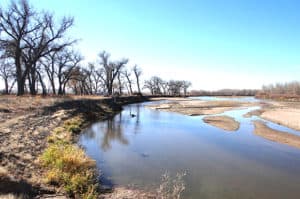 Robert Walker, Wiggins, CO long time farmer, served on the Board of Directors for the Central Colorado Water Conservancy District (Central) from
1979 to 2003. Bob, as he liked to be called, was an early pioneer in the development of groundwater recharge projects for Central. Even using his own equipment, time and fuel, Bob was the person behind leading Central to the construction of the Kiowa Creek and Milliron Draw recharge projects which were decreed in Division 1 Water Court in 1981. Bob was a strong leader, champion of Central and is responsible in many ways for the success of Central’s mission and goals. Central’s Board of Directors, by Resolution, affirmed the name of this Wiggins area recharge project, the Robert W. Walker Recharge Project by unanimous vote.

The Walker Recharge Project will operate under a decree entered by the District Court, Water Division 1, Colorado, in Case No. 16CW3202. Diversions from the South Platte River at rates up to 100 cubic feet per second (cfs) and volumes up to 30,000 acre-feet per year will be delivered to recharge ponds.